These are screenshots from the Warner Home Video DVD of The Shining (specifically, the US/Region-1 “Kubrick Collection” release from 2001), showing the two “errors” most commonly cited in the film’s second-unit helicopter footage. Click on any image to view it at full size. 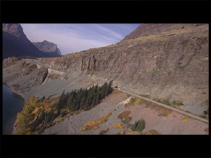 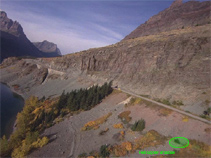 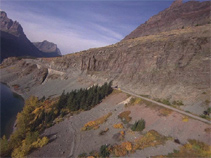 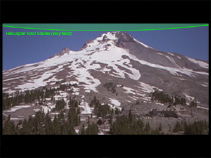 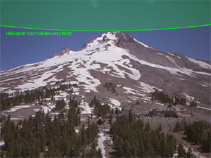 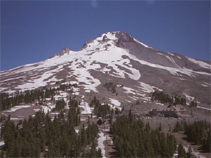 In both shots, the “error” is marked off with green lines, shading and text. The black matted screenshots on the left show the film framed for the standard 0.825″ × 0.446″ 1.85:1 composition area (as described by Gordon Stainforth and as projected in most US cinemas). The unmatted screenshots in the centre show the film as it appears on the DVD, with the matting removed to show the full original negative. The original unretouched screenshots appear on the right.

Update 24 August 2015: Thanks very much to Jeff Blyth, who wrote to share more details on the film’s aerial photography:

I was the helicopter cameraman that filmed the scenes of the opening in Glacier National Park. We were filming with full Academy apertures on both 35mm cameras and I was monitoring with a black and white video set-up that was mounted between the cameras. I did not have thru-the-lens capability and one of the cameras used a 9.8mm lens, more than likely the camera that caught the shadow. There was only the roughest line-up possible when using that camera/lens combination because my video pick-up was not nearly as wide to match what it was getting. I could use the monitor for centering and lining up the shots but couldn’t see if the shadow had crept in. We were filming for a month, and never saw dailies, so I had to rely on the editor and Stanley Kubrick to pick those shots that worked for them. It was a great surprise when I went to the premiere as well as a disappointment that other, more intricate and involving shots, didn’t make it into the film. I was perhaps the only one pleased to see some of my additional footage into the ending of Blade Runner. Those were shots that I grabbed when I was waiting for the yellow Volkswagen to return to our starting points. If the light was really good (not all that often) or there were some nice low-hanging clouds, I would always look for something to film.

By the way, I was not the cameraman who shot the Timberline Lodge aerial. Our unit never went to Oregon, only Montana. I still don’t know after all these years who did that shot, but I assume I get blamed for that “error” too! 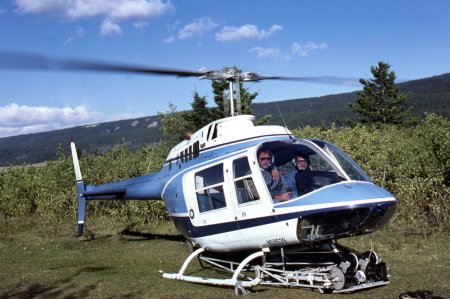 This page and all contents ©2012, 2015 Douglas Bailey except screenshots ©2001 Warner Home Video and Jeff Blyth quotation and photograph ©Jeff Blyth. Use of these screenshots is for informative purposes only. No challenge to Warner Home Video’s copyright on The Shining is intended or should be inferred.